My Name is Sam and Yes I Can

Add to Favourites
Skip to the end of the images gallery 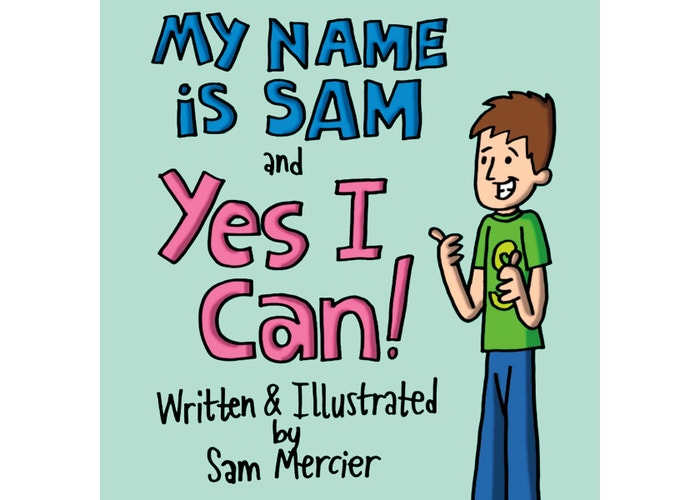 Skip to the beginning of the images gallery
CA$23.99
Add to Favourites
Notify Me When Available
Description

An Eleventh Grader says that he wrote his book to prove that people who have Autism can do anything.


Sam Mercier, a Winnipeg high school student, is the winner for this year's B'nai Brith Canada's Manitoba Diverse Minds creative writing competition for his book "My Name Is Sam and Yes I Can!"


Adriana Glikman, the National Program Coordinator, says he will be receiving the award Thursday morning with his teacher.


"I was so proud I could not stop smiling. I was so happy that people liked my story," Mercier says.


The book, "My Name Is Sam and Yes I Can!" was written by Mercier with the help of his mom, whom he says is "awesome." The pair, along with many other people aiding, worked to create a book by Mercier about his emotions.


"This book is very important to me. It lets me explain that I have feelings and how I can do most things, just like everyone else. Different does not mean you cannot be included. Everyone needs to be included because it is the right thing to do."


The book featuring Mercier's illustrations addresses that while someone who has autism may be different, it is important to stay positive, be inclusive, and to have respect for others. Mercier says that he loves using illustrations to express his feelings.


"Diverse Minds is a contest designed to encourage the values of diversity and inclusion in our country through the mediums of storytelling and illustration," B'nai Brith Canada says in a release. "Each entry promoted these important values in a unique and creative way."


To form the book, Mercier says he wrote down his ideas and then organized them into a readable book. The young author says that it took a lot of editing.


"I think that my book is fantastic."


Mercier enjoyed creating pictures, demonstrating his feelings in a creative manner. Now, his book is going to be distributed to every library across the province and will be professionally published.


"I love to let people know that just because you have autism or that you are different does not mean that you cannot be included. We need to love everyone."

Specifications
Reviews
Write a Review
Only registered users can write reviews. Please Sign in or create an account
( )
Compare

on your next online purchase!

Join our email list and take 10% off your next purchase of $150 or more. You'll also be the first to know about new online and in-store promotions as well as new and featured products.

Offer valid for first‐time subscribers only. One coupon per customer. Exclusions apply, please see Promotion Information for more details. By submitting your email, you are providing consent to West Coast Kids to send you marketing emails. You can unsubscribe at any time.